Take It Off The E-String, Put It On The G-String!


A great description of Burlesque and its purpose...

Excerpt from the Zanesville Signal May 30, 1943 (author uncredited):

"BURLESQUE HAS US LAUGHING AGAIN!
•Its Comic Clowns, Luscious Lassies and Robust
Humor are Perfect Antidotes for War-Time Stress

OLD - FASHIONED burlesque—the real burlesque—jovial, carefree, robustious, with all its elements of unrestrained whoopee, is enjoying an unprecedented revival in cities and small towns all over the country during these desperate war days. And, in its own rollicking fashion, it is doing its part to help win the war by providing relaxation and enjoyment to thousands of workers in all branches of industry. Just what is old-fashioned burlesque?


It is girl-and-music-and fun entertainment, with the accent on high spirits, uproarious comedy, unabashed belly-laughter! It is a generous mixture of clowns, gayly tantalizing


girls, girls! The more of them the merrier—and the more beautiful, of course, the better! Its most distinguishing feature, barring the beautiful girls, is its naivete, its almost childlike exuberance


and its unashamed effort to take nothing seriously."

So don't forget your roots, burlesquers.
Make 'em laugh.
The audience deserves to have even more fun than you're having. 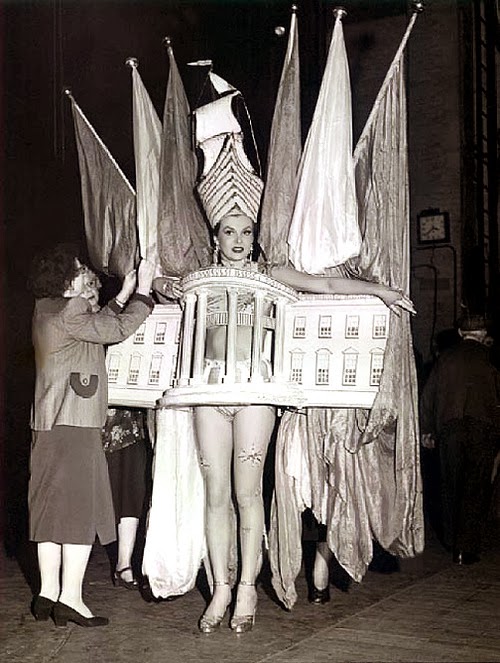 Posted by Burgundy Brixx at 12:03 PM No comments:


It's interesting to note that Broadway saw the big-picture issue of censorship in the arts when Mayor LaGuardia began his crackdown on burlesque - and joined in the fight!

"Burlesque has been banned in New York again – the last time was in 1937 and it wrote finis to the colorful career of the Minsky Brothers.
Again, as in 1937, the cause of burlesque is being taken up by its big brother, the legitimate theatre. There is less brotherly love than desire for self-preservation in the gesture.
Broadway always gets behind burlesque in its fights against censorship because it feels that if burlesque loses without a struggle, the eye of the censor, perforce, will be directed at his next victim, the legitimate stage. That isn’t pretty to contemplate.
This time Broadway’s spokesmen are Russel Crouse and Howard Lindsay, co-authors of “Life With Father” and “Arsenic and Old Lace” which are currently long-run hits of the New York stage.
“We are at Munich” they cried in unison the other day. “and complacently at this point, just because it involves burlesque, does not mean peace in our time. The danger is that the Mayor and the licence commissioner can impose their taste on the entire theatre.
Mayor Fiorello LaGuardia and Commissioner Paul Moss are using much the same ammunition they hurled four years ago.
They contend that burlesque is indecent, does not constitute entertainment and is pretty low stuff generally.
Warming to their subject as they denied operating licenses to 14 theatres, they tossed out such lurid phrases as, “cesspools of indecency” and “breeders of prostitution”. This is what they said four years ago, so the burlesque theatres called themselves “Variety” or “Girlie Shows” or “Follies” and went on with a modified strip-tease. This time they can’t even have the strip-tease.
Meantime, burlesque representatives are screaming that high-handed measures are being used.
…Meantime, a great effort is being made to stir up the public.
Petitions are being circulated and voters are being urged to sign for the reinstatement of burlesque.
…All of this seems rather silly to me. Regardless of the virtues or vices of burlesque, the point at issue seems to be whether a couple of gents, who happen to hold office, can arbitrarily decide on the entertainment of a people, and, more important, whether they can do it in a star chamber session at which the public has no voice." 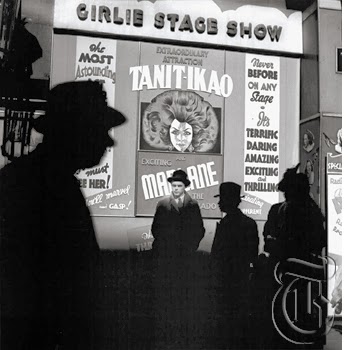 After the 1937 crack-down on burlesque in New York City, Burlesque theatres were forced to change their name to things such as "Girly Show" or "Follies" to avoid the censors.

Posted by Burgundy Brixx at 10:53 AM No comments:

"The first real “nekkidness” on Broadway was not shown in a burlesque show, but in the 1923 Artists and Models. Earl Carroll Followed it, and soon after, burlesque adopted it to the practical exclusion of everything else."

"Stripping: There are four strip classifications: Slow, fast, swing, and there are two girls doing a dramatic strip (but this is a family newspaper)..."

"Gypsy Rose Lee Department: When in burlesque the glamour girl used to arrive at the theatre with her own maid, her chauffeur and  jewelry…in her spare time she would sew costumes for next week’s show…If Gypsy liked a strip woman in the show she would make her a costume."

"Gypsy introduced pasting of bows and ribbons on the skin and started “pinning” (Costumes held together by pins which were taken out one by one and thrown to the audience)...When a rival star of equal importance joined the show to be co-featured, Gypsy went out and bought a $2,500 ermine coat to use in her strip act. The rival quit." 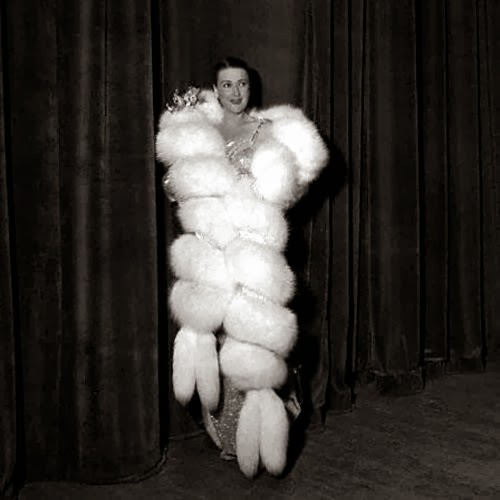 Gypsy in her gorgeous fur. I don't know for certain if this is the coat of record, but I wouldn't be surprised if it were!

Posted by Burgundy Brixx at 8:38 AM No comments: